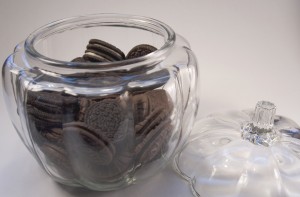 Today I came across a series of tweets about a food blogger who was upset that another blogger took her photo and recipe, reproduced it on her site while providing a credit and link back in smaller text but also tagged the original blogger on Facebook.

Earlier in the week, Confessions of a Cookbook Queen posted a photo and recipe for Shamrock Mint Oreos. Although unclear because there is no copyright notice, I’m taking her word that the image is hers. As such, it is protected by copyright and any use of it on the other website is clearly a violation of copyright. The law does not require a copyright notice, but it does help to let people know you own it.

The issue actually is a bit more complicated regarding the photo because on the photo, Cookbook Queen uses a registered trademark, Oreo. Kraft is the owner of the registered trademark for the word Oreo as it pertains to cookies, and in fact that trademark has been registered since 1913. So we have a photo of homemade sandwich cookies in the style of what an Oreo would look like with the word Oreo on the photo. This brings up the issue of Trademark Infringement.

Is the original photo infringing on the right of Kraft’s exclusive use of the word Oreo as pertaining to this type of sandwich style cookie? The result is that even though Confessions of a Cookbook Queen may have a copyright on the photo in question, it does contain a potentially infringing use of a registered trademark. That, however, does not mean the other blog can take the copyrighted image, whether giving a link back or not.

Now, let’s get to the recipe part. I’ve discussed Recipe Copyright before and mentioned that ingredient lists are not protected by copyright. So let’s look at the directions. Are they sufficiently original to be considered substantial literary expression? There is some argument the directions could rise to that level, because there is a mention of specific dimensions and cutter. Although I don’t think it’s a strong position, there is some argument that there could be a copyright claim.

While I did not discuss this in my prior post, here we have an example of what could be a derivative work. In the United States, the Copyright Act defines “derivative work” in 17 U.S.C. § 101

A “derivative work” is a work based upon one or more pre-existing works, such as a translation, musical arrangement, dramatization, fictionalization, motion picture version, sound recording, art reproduction, abridgment, condensation, or any other form in which a work may be recast, transformed, or adapted. A work consisting of editorial revisions, annotations, elaborations, or other modifications which, as a whole, represent an original work of authorship, is a “derivative work”.

The original blog says she adapted the recipe. That would mean she used a pre-existing work. Is that pre-existing work subject to copyright? I don’t know about the specific recipe. Although, the cookbook from which it came certainly is.

In this particular instance, it is clear the copyright claim would be tenuous at best. And if the recipe is not subject to copyright, there is little if any protection against someone taking it and using. The issue of plagiarism doesn’t come in to play because the second blog actually credited the recipe both in the post and by tagging in Facebook. The credit was provided, as Cookbook Queen mentioned, although in a smaller font and not quite as obvious and maybe it could have been.

So what to do when there is likely no copyright claim for the recipe, nor was there plagiarism? There is still the issue of the copyright for the photo, for which that alone Cookbook Queen could ask that the image not be used without whatever attribution she wishes, if she so wishes to even permit use of her photo. It is, after all, her copyrighted image. The issue of the use of a trademark would be handled separately by the trademark holder.

When excluding the copyright issue of the photo, this situation likely comes down to ethics, standards and best practices. Obviously Cookbook Queen did not like her recipe being taken by this ‘bigger blogger’ and she asked that there be better attribution. It appears that bigger blogger was not happy and has since taken down the post and put up an explanation post. Bigger blogger likely did not appreciate getting an email from a ‘smaller blogger’ asking for better attribution.

This situation clearly demonstrates the differences of what the standards and best practices are among bloggers. When there is no law to lean on, all we have is our ethics and standards and any best practices that are out there. Clearly, bigger blogger and Cookbook Queen do not see eye to eye on these. But what it comes down to is that if you’re so in love with someone’s work, copyrighted or not, send your readers to them.

Your readers go to your blog because they love you and appreciate all that you share. They’re not going to abandon you. And if you’re a bigger blog, showcasing smaller bloggers is terrific. Why, though, use a smaller font to tell your readers how to find the original post? And why do a cut and paste job instead of just sending your readers to the other blog?

Maybe it’s not illegal to have taken Cookbook Queen’s recipe, but it’s definitely not cool!

What are your thoughts? Do you think ‘bigger blogger’ did anything wrong? Did Cookbook Queen over-react? How would you have handled this?

Disclosure: While I am a lawyer, I am not offering legal advice. Posts on legal matters are intended to provide legal information and do not create an attorney/client relationship. This post is part of my Blog Law Series.