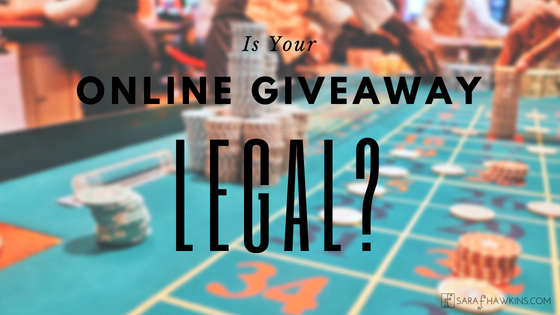 More and more I’m seeing giveaways that may not be fully compliant with federal or state laws governing giveaways. Whether online or off, there are a host of laws that every contest holder must follow or risk significant fines or, in some states, criminal prosecution. Giveaway laws in the U.S. cover sweepstakes, contests, and lotteries.

Sweepstakes and contests have been used by marketers for decades to create awareness for their product or service. Bloggers are getting into the promotion business, not only for themselves but also for brands of all sizes. While brands often have legal counsel to advise them on the intricacies of running a contest that complies with all laws, that information is not usually passed down to bloggers. As such, bloggers are left to their own accord. This has resulted in a number of different tactics being used. Unfortunately, many bloggers are not compliant with the various giveaway laws exposing them to potential liability.

What are Sweepstakes, Contests and Lotteries?

Sweepstakes are prize giveaways where the winners are chosen by the luck of the draw (“chance” or random are often used to explain how winners are chosen). Prizes can be almost anything a blogger can think of from handmade cards to an all-expenses-paid trip.

Contests choose a winner based on some merit. The winner is chosen based on some criteria such as best photo, funniest parenting tip, etc.

A Lottery is a prize drawing where people must pay money to buy a chance to win. Lotteries are highly regulated and should not be run without consulting with legal counsel.

If a sweepstakes or contest promotion allows nationwide participation, the promotion must comply not only with federal regulations, but also the regulations of each state. For example, in California, the Business and Professions Code governs the promotion of the sweepstakes while the Penal Code (criminal law) sets forth the definition of a lottery.  In New York, if the total value of the prize(s) offered is more than $5,000.00 the law requires that consumer sweepstakes be registered and bonded at least 30 days before the commencement of the sweepstakes. The State of Florida also has bonding requirements for sweepstakes.

Could my Giveaway be an Illegal Lottery?

A lottery has three things: Prize, Chance and Consideration.

Prize – without a prize your giveaway would be lame and no one would enter it, so there’s always a prize!

Chance – pure luck! You could get around this by having some skill requirement but that is often difficult to manage or greatly limits the number of people who will enter.

Consideration – something of value. Often it’s money, but it doesn’t have to be. Depending on what you require entrants to do, you could be pushing the envelope on this element. Each state may have their own particular definition making it very difficult to manage.

When it comes to online entrepreneurs, there are few things more valuable than followers. As such, requiring someone to ‘like’ you or ‘follow’ you could be construed as consideration. Even more important, asking an entrant to go to a third-party site, navigate to find a product or services and then report back to your site is even more likely to be deemed consideration and thus placing your giveaway into the classification of illegal lottery. Time is exceedingly valuable!

While online promotions seem to be everywhere, the laws pertaining to this realm have not been as quick to develop as the internet itself. As such, even by providing an easy and simple means of entering but providing additional entries conditioned upon doing certain things may result in your giveaway not complying with necessary laws.

Who can enter my giveaway?

You will often see that a contest or sweepstakes is only open to those 18 years of age or older. This is because the laws relating to minors adds a layer of complexity that many are not willing to manage.

Because websites often have visitors from all over the world, can you just let anyone enter? The short answer is yes, if you are willing to comply with the laws of every jurisdiction (including those of foreign countries). In Canada, for example, the winner cannot be chosen by a random selection, but rather some element of skill must be involved. And if you do wish to open your giveaway to residents of Canada, you must go one step further and either exclude Quebec or add in the various additional rules that province requires.

While online entrepreneurs definitely don’t want to leave their Canadian visitors out in the cold, it’s a harsh reality of administering a giveaway through a sweepstakes that residents of Canada must be excluded. It’s the same reason readers under the age of 18 are often excluded. It becomes cumbersome to administer the promotion if more laws must be followed.

Checklist for your giveaway:

If your giveaway winner will be chosen at random you are hosting a sweepstakes and thus you should comply with the laws regarding sweepstakes.

1. Identify the prize – provide as much detail as necessary to both identify it and make it attractive to your readers

2. Who can enter – detail who is allowed to enter, as well as those excluded (for example, employees of the sponsor)

3. Duration – clearly set out when the giveaway (sweepstakes) will begin and end, and follow through

4. How to enter – let the person know what they need to do to enter your sweepstakes, keeping in mind elements of consideration that could vault your sweepstakes into illegal lottery territory. Ultimately, the best bet is to keep the entry as simple as possible.

5. How Winner Is Chosen – describe how you will choose your winner, especially since you are likely choosing randomly

6. Technical Issues – since we all know there could be technical problems, let people know how they will be handled. For example, will you delete duplicate entries? If your site goes down, what will you do?

Group of Bloggers/Influencers Come Together For Giveaways

Recently I’ve noticed that a group of bloggers or influencers will get together and offer several prizes. This is a new phenomenon that presents unique concerns. While it is uncharted territory, the legal ramifications can be far-reaching. Attention needs to be given to the total value of the prizes given away because it could require either filing for and obtaining bonds in states that require them, or declaring their promotion void in those states. Because the giveaway is often billed as a cross-blog promotion and involving many prizes, it would be advisable for the influencers involved to ensure they are compliant to avoid potential civil and/or criminal violations.

While this will not apply to all, you need to be aware that any giveaway with a winner getting a prize valued at $600 or more must be reported to the Internal Revenue Service. Knowing that, influencers should not only make entrants aware of the value of the prize but also that they will need to complete a prize validation and are responsible for any taxes that may result from winning.

In summary, running a legally compliant giveaway involves a lot more than throwing up a post. Influencers and brands need to adhere to a variety of federal and state giveaway laws, as well as ensure compliance with federal agencies if that is the case. And while influencers and brands do not want to exclude any of their readers, sometimes it is necessary. Finally, if your giveaway is over $5,000.00 or includes certain items (i.e, alcohol, spirits, tobacco, milk) there will be other state giveaway laws and bonding requirements that may need to be met.

If you are planning a sweepstakes or contest and would like more information on how to do it right, please contact me.