Your Marketing Promotion Hashtag Is Not Appropriate FTC Disclosure 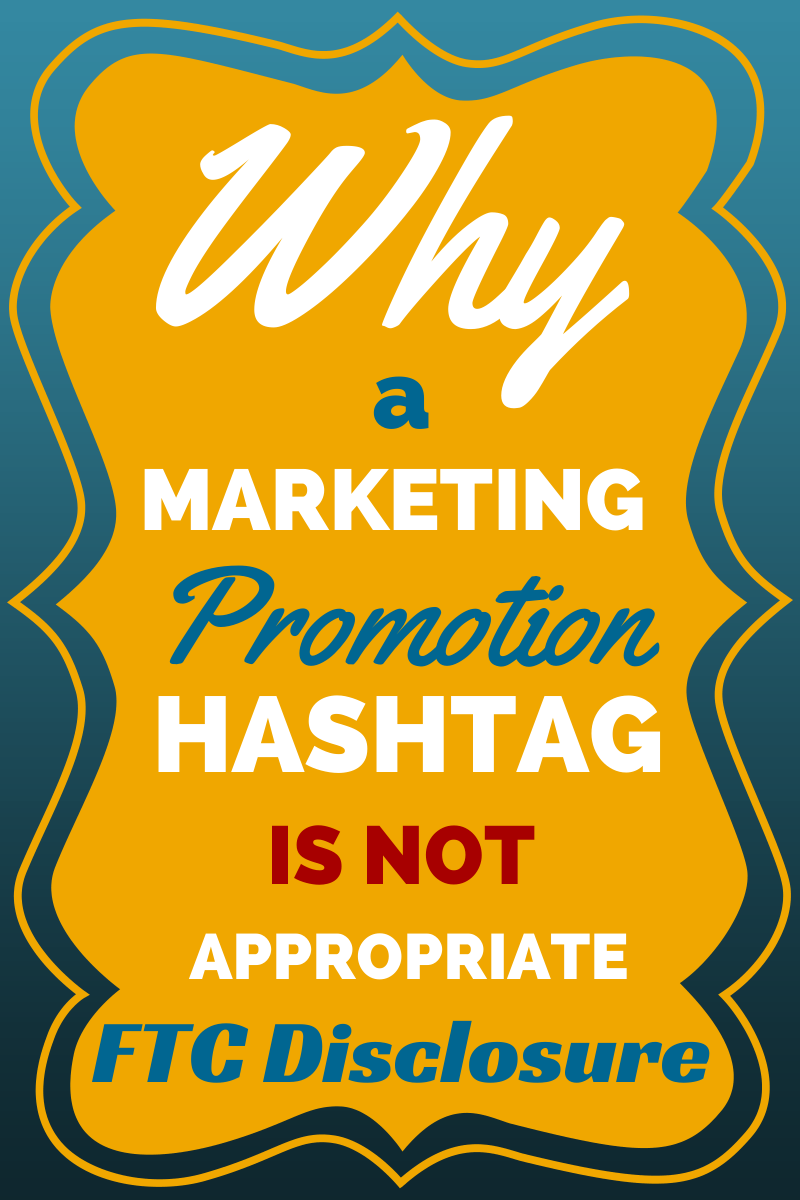 Regardless of the social network, hashtags (the # symbol for those who may not be sure what I’m talking about) are an important way to communicate additional information. Originally created so users can search topics, hashtags are now integral to marketing promotions on social networks. That means PR and brand professionals are thinking about what short phrase will best communicate their program long before the program is executed. FTC disclosure

When a brand or agency works with influencers for these promotions, often the influencer is required to add the specific hashtag to each of their social shares (for example, #cutseybrandpromo, #FreshSqueezedJuice, #LuxuryCity, #BrandMoms, #AwesomeHotelStay, or #MovieTagline). That’s an important part of tracking and obtaining metrics. From the brand’s perspective, that tracking information is key. Being able to follow conversations, know what participants are saying, and also be part of the conversations are all significant parts of determining a program’s success.

We find these branded hashtags not only with paid branded programs but also as part of community chats on Twitter, Facebook, and Google+. Even the more visual platforms of Pinterest, Instagram, YouTube and Vine incorporate hashtags and are included in a brand’s social promotion. And while a brand can use the hashtag on its own social channels without much need to provide additional disclosure, the FTC Disclosure Rules are met head-on when brands hire and engage influencers to be part of their promotion.

If you are a social media professional or someone who considers themselves social media proficient, you probably see these hashtags and think it’s a paid brand campaign or the blogger, influencer, or celebrity is likely being paid or compensated in some way for using including hashtag. And you’d probably be right. But does the so-called “average consumer” understand that’s the case?

The Federal Trade Commission is tasked with protecting the average consumer, which is why they have comprehensive FTC Disclosure Guides for brands, bloggers, influencers, marketing professionals, and celebrities. And while you and I may be slightly more educated about what is meant by a phrase preceded by the little hashtag, if we’re not sure if it means the share is part of a paid campaign imagine how confused the average social media user must be.

So, why is that little hashtagged phrase a potential thorn in your side, my side, and in the FTC’s side? Let me count the ways.

1. Just because the brand or PR agency knows it is using a hashtagged phrase for their promotion – whether it be a trip, a freebie, an ambassador program, a one-off conversation, or a long-term branded campaign – doesn’t mean everyone knows. This is why the FTC disclosure guides were provided to brand professionals.

2. Hiring influencers, be they bloggers, pinners, celebrities, or users of a specific social platform, requires that there be disclosure so the average consumer understands that what these people are sharing is because they’re being paid or compensated.

3. If the social media user is engaged specifically by the brand or its agency, be it paid or not, and asked to use a specific hashtag when sharing there is likely a business relationship or material connection between the parties and followers should know that what’s being shared is because of this business relationship. These scenarios are clearly contemplated by the FTC disclosure guides.

4. A hashtag alone does not sufficiently communicate that the influencer’s objectivity may be compromised. While many will say that they’re always truthful and honest or aren’t being told by the brand what to share, the fact remains that the average consumer likely doesn’t know this.

A hashtag wasn’t designed to tell readers or viewers that the communication is part of a paid, compensated, or business relationship. That brand, PR, social media, and marketing professionals understand this is very important. Especially for the FTC. Because hashtags were for tracking conversations, the FTC will not likely agree with the premise that it should be clear that the reader should understand there’s a business reason for using the hashtag. Unfortunately, that argument is weak given that unaffiliated people may use the hashtag or that there is a more traditional marketing campaign urging the public to append the hashtag to their social shares.

So what’s a marketer or influencer to do? It’s quite simple, disclose the relationship and stop thinking your awesome marketing hashtag does something it does not. While both the brand and the influencer have the obligation to ensure proper disclosure, ultimately it will be the brand and, perhaps, its agencies that will be held responsible if the FTC decides to pursue action. And while it’s not likely that a one-off promotion will land a brand in the FTC’s cross-hairs, the fact is brands, agencies, and marketing/social media professionals are doing multiple promotions and should know that disclosure is a required part of any campaign where influencers are asked, required, or encouraged to include the program’s hashtag.

Oh, and if you don’t believe that the FTC notices this stuff take a look at this recent letter for a Pinterest promotion by Cole Haan. Even though the FTC did not take any specific enforcement action, don’t believe this was a “free pass” to Cole Haan. I’m certain it took up a great deal of time and cost the company quite a bit of money to deal with this matter. Given that most agreements with agencies include indemnity clauses, it’s possible that there were conversations between counsel for Cole Haan and the agency as to who may be paying for this “oversight”.

What are your thoughts when you see influencers using a brand-sponsored hashtag? As a brand, agency, or marketing professional do you think your program hashtag sufficiently discloses the relationship?