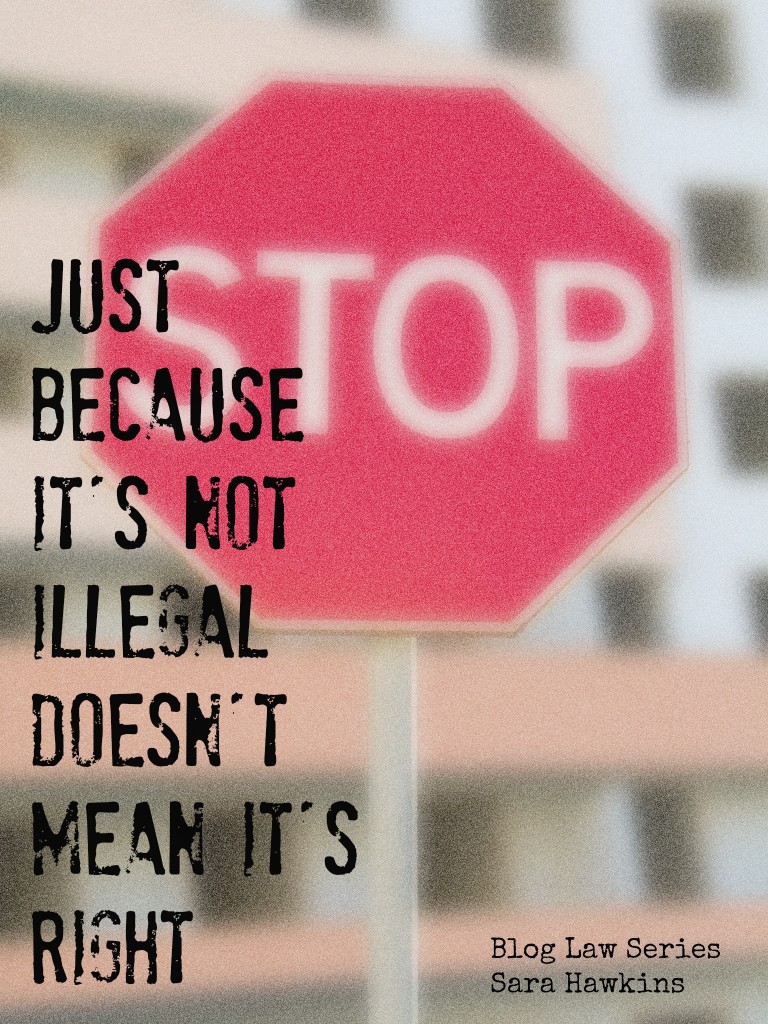 Frequently I am contacted by someone whose online work is being used without their permission. Whether it is an idea, a design concept, something from Twitter, a hot deal, a complete post, photos, graphics, it seems like there is a lot of taking going on. In addition, as many are trying to grow their online presence some are taking it upon themselves to poach from others.

For the most part, I’d say about 90% of the taking or doing unto another via some type of online medium, as it relates to online content sharing and creation, is without legal consequence. Plagiarism isn’t illegal. Stealing an idea, unless covered by some type of non-disclosure, is not illegal. Designs? Depending on how much is lifted there could be issue. But generally, what I’ve been alerted to hasn’t risen to the point of copyright or trademark infringement.

I’ve discussed the issue of copying blog posts and the challenges faced by online content creators. Depending on the type of post there may be a reason to scream foul and mount the troops for a take down. But when the post would not rise to the level of being subject to copyright, because it’s a list or may not be considered sufficiently original, copying and giving a ‘shout out’ or link back doesn’t make the taking right.

Years ago, I studied Corporate and Business ethics under the foremost leading academic authority on the subject, Professor Marianne Jennings. It was in her class, as well as working with her to edit one of her textbooks, that I solidified my interest in the field of Ethics, Corporate Compliance and Corporate Responsibility. And over the years I have continued to stay current in these areas, especially as the internet and new media platforms emerged and have grown.

The law, for many, is very black and white. They don’t break the law. Or at least not enough to get caught. Especially when we’re talking about things like copyright and trademark laws. I’m often told they’re not real laws because no one really gets hurt. Well, maybe not like crimes that have become the basis of an entire genre of television drama but copyright infringement does hurt the many people who share their work.

Many believe that unless they are actually violating state or federal law they can turn a blind eye to the consequences of their actions. Because, after all, it’s not illegal per se. And we all know ethics is a big muddled blob of wishy-washy-ness.

Ethical standards vary dramatically from one person to the next. We may even vary our own ethical standards depending on the exact situation. It is this inconsistency and the judgement we can heap upon others that makes the appropriation of our work even more upsetting.

Some of the most ironic circumstances can present themselves. I’ve seen websites that have very forceful ‘All Rights Reserved. Don’t Copy My Stuff’ type of warnings. Yet the blog has wholesale cut and pasted another person’s work. Oh, the irony. And the lack of common sense.

But it goes on many, many times a day. Cut, paste, link back. Cut, paste, ‘shout out’. And some people are just naive and don’t realize that’s not done. While others just don’t give a darn and will lash out at you for daring to call them on their unethical behavior. Still, others rely on the Fair Use doctrine think that it’s fair to use anything found on the internet.

The golden rule seems to have been tossed to the side. Do unto others as you would have done unto you. Plain, simple and straightforward. But for some, it’s disregarded. As if they are somehow special. Well, let me say this – they’re not. And you shouldn’t treat them like they are.

Ethics is a funny thing. There is such a broad spectrum of what is and isn’t ethical. While there is some wiggle room with laws, it seems like ethics is more like a wide open space with plenty of room to stretch. Ethics isn’t an either/or proposition. Doing what’s right isn’t always an easy choice. And my idea of what is right may not be yours. And vice-versa.

However, with online content creation, as with many other businesses you can easily find ways to justify every choice. Right or wrong, who is to judge you, you ask. Besides the fact that there are what many consider to be ‘best practices’, ignoring them comes with some pretty harsh consequences. If you’re willing to deal with the fall out of your choices, that’s fine. But understand that there are consequences. And many online content creators have strong and dedicated communities who will come to fight on their behalf.

By practicing basic playground rules, the online world could be a much more beautiful landscape:

I’d love to hear your thoughts. What are your biggest concerns when it comes to online content creation and ethics?