Legal Ins and Outs of Live Streaming in Public 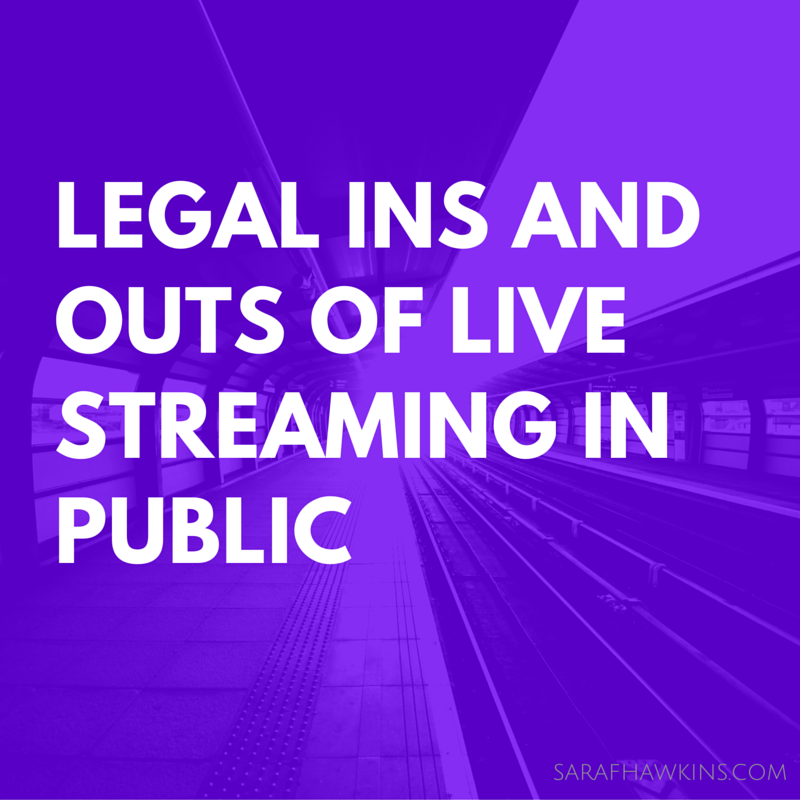 Live streaming has been around for a number of years. But until Meerkat and Periscope we didn’t have a very portable way to live stream video. There was Google Hangouts, which is a live streaming service, but the mobile app didn’t really make it easy for mobile and active use. You could record short video and share them, a la Vine and Instagram Video. But there wasn’t a viable option for being out in public, your office, at home, or pretty much anywhere you wanted, and share audio and video of what was going on around you.

For those who aren’t exactly sure what live streaming is, it’s basically the ability to broadcast audio and video as it happens. It’s like having your own channel. Any time you want to “go live” you can.

As with any new technology or platform, there are bound to be legal concerns. That’s no different when it comes to live streaming. When it wasn’t portable, it wasn’t as prolific. Still there were legal issues with regard to trademark and copyright, but the learning curve for the legal issues wasn’t as steep since those using the live stream service were often business people who had a basic understanding of these legal issues.

Now that live streaming is available to anyone in the world with a smartphone, the legal concerns are much more relevant to the average person. There are so many great uses for live streaming. The key, though, is that for commercial use there are significant legal concerns. And even for personal use, the legal concerns should be taken into consideration. While the somewhat fleeting nature of live streaming may make you think copyright isn’t much of a concern, there is nothing in the law that say how long a copyrighted work must be used without permission or exception to qualify for infringement. Add to that the ability to rebroadcast, or upload to a more static video service such as YouTube, and the temporary aspect of live streaming goes away.

Copyrighted Content – Meerkat and Periscope, as well as Google Hangouts, have Terms of Service that prohibit users from violating the copyright of others. This is part of the Safe Haven provisions of the DMCA and is more for their protection than yours. If you, as a user, violate the copyright of someone then it’s on you, not them. This means, of course, that using copyrighted music in the background would be a violation of the TOS, in addition to any copyright.But there are other copyright issues that many don’t think about, such as the copyright of artwork, performances, written materials, and architectural works. Incorporating a copyright work into your live stream exposes you to liability you may not have intended. Ever wonder why on some TV shows the artwork on the walls is pixellated? It’s because it’s a copyrighted work and they didn’t get permission. That’s easy to do when you have the ability to edit. However, with live streaming there is no ability to edit and if you infringe someone’s copyright there can be consequences you didn’t anticipate.

Commercial or Private Use – if your live streaming project is for commercial use there are a host of legal concerns. Not only are there copyright, trademark, and trade secret issues to be aware of, but you’ll need to know about privacy laws, publicity rights, loitering or trespassing, and location releases.If you’ve ever been out and have seen a movie, video, or ad being filmed or shot you likely recall there being an area that was cordoned off. They do that for a number of reasons, one of which is to make sure there are no random people in the background. It’s why when extras are needed for crowd scenes or background they hire people. Because when you hire people you can get them to sign away their rights to sue you.When it comes to trademarks and live streaming for commercial use, you really do need to learn how to stay on the right side of the law. The basic rule is that unless you own the trademark, it should not be visible in your live stream. Of course, there are exceptions, but for the most part if you’re live streaming for commercial use avoid any third-party trademarks.

Location Concerns – regardless of whether you’re live streaming for personal or commercial use, you have to make sure you have the right to be where you’re filming. If you’re on your own property, that makes it simple.However, if you’re in public or on private property there are legal concerns to manage. On public property, you’re likely safe to use the property. That’s not to say you have an absolute right. For example, the street may be public property but you can’t obstruct traffic, the courthouse is public property but there are limitations on what you can do, and your child’s public school may be public but they also have the right to limit your actions for the safety and security of others.For commercial live streaming many cities require a permit, so think about your use. If you’re an influencer and your live streaming is sponsored you may have crossed into commercial use and could be subject to those additional requirements.Trespassing and loitering may seem like petty offenses. In today’s world, though, you’ll want to be aware of these things. If you need to get permission, it’s always best to get permission in writing. Keep in mind, though, that permission to physically be on the property is not the same a release of rights to use the property in your live stream.

Privacy and Right of Publicity – This ties in with Commercial vs. Private use as well as Location concerns. Privacy is the right to control information about you, regardless of how it’s shared. The Right of Publicity is the right to protect your name and likeness from being exploited for commercial gain. Sometimes these rights overlap, and other times one exists while the other does not. You may not have privacy rights when you shop at your favorite store, but they don’t have the right to use your name or likeness for commercial gain. Privacy and Rights of Publicity are state law matters, which adds to the confusion because some states are more lenient than others. If you are broadcasting your live stream from a public space, and are doing so for commercial purposes, you may find yourself in legal hot water if you do not obtain consent from people who are captured during your broadcast.This is a very broad definition of commercial, too. Don’t just think of big brands. Commercial purpose would include influencers who are being paid to live stream; social media professionals who are live streaming to sell their goods or services; musicians/artists/authors broadcasting in an effort to sell their goods or services;  and a host of other situations. If you’re live streaming solely for personal use, your main concern will be the privacy rights of others. Whether you’re in a public or private setting, there are a variety of privacy rights you need to be aware of. It makes sense not to live stream in the public bathroom, but given the number of people taking photos (which I’m going to assume are selfies, because otherwise I’ll freak out) in public bathrooms I’m not so sure everyone understands the privacy rights of a public bathroom. If you’re at a public event like a music festival, state fair, or marathon evaluate your surroundings so you’re not right in front of the port-a-potties. They may be in “the public” but there is an expectation of privacy. And that’s the magic phrase – “expectation of privacy”. If the average person would have an expectation of privacy, even if they are in public, then live streaming in that area should be off-limits.

Disclosure – For corporate brands on their own channel, it’s pretty obvious most of the time since the brand isn’t a person. It’s more like an infomercial. But just like an infomercial, there are FTC laws related to truth in advertising that need to be considered. If a celebrity, influencer, brand ambassador, or the like is “taking over” the brand’s live stream viewers needs to be aware that the person is a paid endorser. Same thing for influencers. If you’re doing a sponsored live stream, disclosure needs to be made. Exactly how is not explicitly known. Like much of social media, the logistics of FTC disclosure is a bit hit and miss. Ultimately, though, you’re responsible for making sure viewers know that what they’re watching is some type of paid content. Whether you call it sponsored, advertorial, native advertising, marketing, or plain ol’ advertising it should be very clear to the audience that the content is there because of a business relationship.

While live streaming is new, shooting video is not. Many of the same legal concerns related to making a commercial video relate to live streaming. In addition to the above, if your product or services is one that is regulated you’ll want to consider those as well. For example, the FDA has requirements and limitations regarding claims for food, drugs, and supplements. Various government agencies monitor claims related to the medical, legal, and financial professions. And finally, don’t forget safety. When live streaming in public you may be moving around so be careful. And, of course never live stream while driving.

I hope this shed light on some of the legal concerns you should consider when live streaming, especially for business. Live streaming can be a very engaging way to market and sell your products, services, or business. But just like other aspects of running a business, you need to consider the legal issue before starting your live stream.