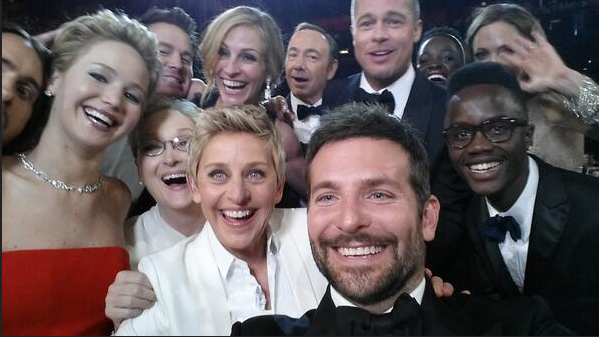 By now you’ve likely seen the above photo. The one Oscars host Ellen DeGeneres posted to her Twitter account during the 2014 Oscars telecast. You know, the one taken with the new Samsung phone as part of the big sponsorship package for the broadcast.

You can see that this image now has over 3 million retweets (as of Tuesday 3/4/14), and that number is certain to grow. What’s not to love about the photo? It has major celebrities, it was taken in fun, and the whole world was watching when the  photo was taken.

But, and when you’re talking to a lawyer and she says “but” you know she’s about to be a total buzzkill. And, yes, that’s about to happen.

Who owns the photo? Well, Ellen posted it on her Twitter account. The phone used was a Samsung that she was likely provided as part of her hosting duties. Samsung has a $20 million sponsorship agreement with The Academy of Motion Picture Arts and Sciences for their sponsorship of the program. In that agreement there were probably several clauses about who would own the photos taken with the devices provided for the broadcast. And while I have not seen any agreement regarding this, I’m pretty sure one did exist.

So, who owns the photo? Surely, Samsung is hoping it’s them. After all, what’s a lucrative sponsorship with an air-tight agreement worth if they can’t own the photos and do with them as they please. And while there would be some issues with regard to publicity rights of all the celebrities, this is where I insert “Hollywood, we have a problem!”

See, Ellen didn’t take the photo Bradley Cooper did. And according to US Copyright laws, it is the one who snaps the shutter who’ll own a photo, barring any specific written agreement otherwise. In that split second when Ellen handed the phone to Bradley she likely wasn’t thinking of the legal implications of that Samsung hand-off. In the moment, Ellen just wanted to get a photo of herself with her friends. But in that moment, someone at Samsung was screaming at the TV “Noooooooooooooo!”

And while I’m using the image, I’m doing so under the Fair Use exception. But unless Bradley Cooper signs over his copyright in the photo, he owns it and it would be up to him to enforce his rights. Perhaps he will sign over the copyright to Samsung, but who knows. This may leave Samsung in a bit of a bind if they’d planned to use the photo. That’s also assuming each person in the photo would sign a release to use their image.

Edit and Update: Samsung has stated they were pleased with the results of the Oscars show promotion that they will be donating $1.5 million to each of two charities – St. Jude Children’s Research Hospital and the Humane Society of the United States.