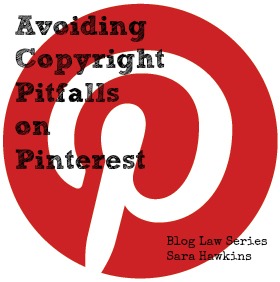 You either know what Pinterest is or you don’t. For those who do, just skip this next section. For the uninitiated, let’s bring you up to speed.

Pinterest in the online equivalent of all those torn out magazine photos, articles and recipes you’ve got taped on your wall, stuffed in a drawer, bookmarked in your browser even though you have no idea how to find them ever again, or piled high in a ‘to be filed’ which used to teeter on your desk until it fell over so now it’s on the floor. For those of you who are ‘my age’, it’s an online cork board. For the younger crowd, it’s similar to a vision board only you can have many vision boards without having to put together any more furniture from IKEA. Pinterest Copyright

In a single word, it’s genius! Pinterest is a hybrid of Etsy, Facebook, Twitter, Tumblr, Posterous and a Blog. As of the writing of this post, Pinterest is an ‘invite only’ community. It’s not some secret handshake kinda place, I think it was done that way to manage initial traffic.  (As of August 2012, Pinterest is open to anyone without an invitation) So, now that you have an idea of what Pinterest is why the talk about copyright? Pinterest Copyright

I signed up for Pinterest shortly after it went live. I used a stealth email so I can lurk and see how this thing worked. Sure, with about an hour worth of work you could probably connect me to my James Bond-ish Pinterest but I signed up for a very different reason. Anytime there’s photo and content sharing there are potential copyright issues. And I wanted to check it all out and see how it would unfold.

First, let me say that the Pinterest Terms and Conditions are pretty straight forward. While I’d guess about 90% of the Pinterest population just clicked the ‘agree’ box, I, in fact, have read the T&C. Several times. There are places where they are convoluted and exceedingly verbose. And, in many instances they’re quite a bit more ‘techy’ than they really should be. But, being a lawyer who works with online content creation, protection and sharing I’m probably a bit deeper into the reality of how a site like Pinterest is used than the average corporate or tech attorney. That being said, I didn’t see anything in Terms and Conditions or Copyright notice that would raise any red flags related to privacy or copyright protections.

I do have serious concerns about Pinterest hosting full-size images on their server, often without knowledge or permission from the original copyright holder. In doing this, Pinterest removes all references to the original source. That creates significant issues with copyright (as well as other issues), especially when the copyright holder may not have provided authorization, tacit or otherwise, for the redistribution of the image. Now, the image can easily be redistributed without any determination of whether the image is protected by copyright. This is an issue I have with Pinterest directly, and not necessarily with Pinterest users. And, of course, Pinterest is based in the US yet it is a global board and thus there are concerns with protecting the rights of non-US citizens as well.

Now, that being said, let’s get to the reality of how Pinterest is used. The site is intended for users to ‘pin’ content to your virtual pinboard. By pinning a specific web page you can add comments, categorize that ‘pin’, and connect an image. And by doing so, potential copyright violations are apt to occur.

It’s not 100% the pin-ers fault, nor 100% Pinterest. Much of the issues related to copyright problems come about because the law is not straightforward. There is a great deal of wiggle room in copyright, which tends to fall under the category of Fair Use. And while there are licensing issues that are addressed in the Pinterest Terms and Conditions, the fact that people don’t read them combined with a lack of understanding of what Copyright Fair Use really is means that problems are bound to happen.

I’m glad you asked! Pinterest Copyright concerns abound so the best thing to do is use these “best practices” and help raise the bar for what is posted and how things are shared.

1. Avoid ALL cutting and pasting – When pinning on Pinterest, the point is to add your insights, comments or thoughts NOT to cut the article and post it so you never have to reference back to the original. Since you’re linking to the original (or what is believed to be the original), in the ‘Describe your pin’ window you write something meaningful to you.

2. Pin the original source – I know that re-pinning is an acceptable practice and a time saver. However, if you’re really interested in what was pinned, take an extra minute or two and verify the source. Sadly, I’ve seen things re-pinned that don’t belong to the site mentioned.

3. Never copy an image from Pinterest to use on your blog! – Chances are whatever you’re doing will not fall under fair use, so you’ll risk the copyright holder saying you’re infringing their rights. If you really like what you see, reference back or get permission.

4. Don’t perpetuate the wrong owner – I’ve seen the same image attributed to many different blogs. This is not only frustrating for the reader but it’s downright maddening for the original owner. It takes a lot of work to get your images taken off other sites, and when you have to take extra steps to prove you’re the real owner it’s not only maddening but also very time-consuming.

5. Watermark your images – I know that many photographers do not like to watermark images because it takes away from the beauty they were capturing. And for the average blogger, like myself, adding a watermark isn’t always easy ( but it’s gotten easier thanks to free sites like PicMonkey). It’s important to know that Pinterest doesn’t crop the image. That means the watermark will remain, letting people know the original source. This is not foolproof, but it’s a start.

Hope this helps with honing your Pinja skills!

UPDATE: On April 6, 2012, Pinterest updated its Terms of Service to specifically address several issues regarding what Pinterest can do with uploaded images as well a creating what they believe are simpler tools for reporting copyright violations. Overall, the general nature of Pinterest did not change. The one big change in the platform to help those whose words were lifted was to limit the comment to 500 characters.