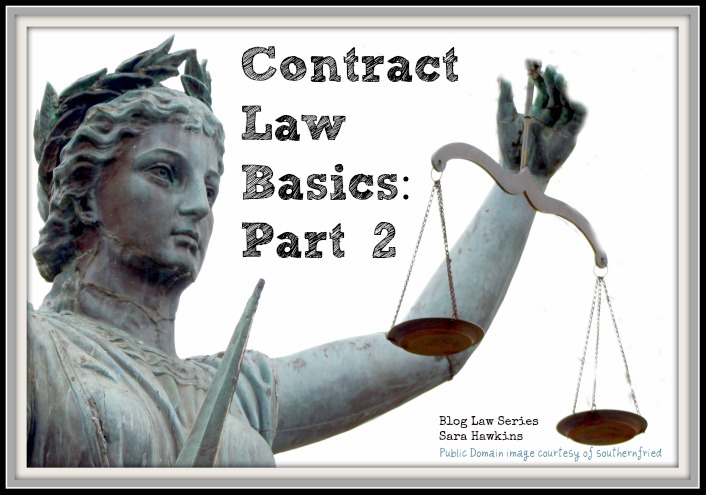 Now that you know contract law basics, I’d like to move on to the main issues of contract negotiation. Most contracts, regardless of who they’re from, will have been crafted by a team of lawyers and heavily stacked in favor of the other party. It’s just how it works. Most lawyers aren’t in the business of making contracts fair and balanced. It’s all about protecting the client.

I take a bit of a different approach and don’t believe that contracts have to be imbalanced or onerous to one party. One-sided contracts don’t do much good because it immediately puts the other party on the defensive. However, if you know the contract will be heavily favored toward the other party you’ll be better able to read through it without feeling taken advantage.

Contracts, or Agreements, are usually negotiated documents. There are many that are not, such as website Terms of Service, Ad Network agreements, and what are often called “click-agree” agreements. But this article is about contracts where the parties are willing to negotiate the terms.

If you’ve been talking with a business or potential client and are entering into a relationship with them, the agreement or contract you receive is something that should be read fully, understood, and, if necessary, negotiated to include terms you need or want as well as spell out more clearly those terms that are ambiguous.

Some aspects of the contract will non-negotiable, but that doesn’t mean you need to forget about them. For example:

1. Jurisdiction – in the case of a dispute, this is the location the dispute will be settled. It will often be in the state of incorporation or where the corporate headquarters are located. No matter where you live, work, or are qualified as a business, very few brands or PR agencies will allow this term to be changed. It’s not in their best interest and creates logistical issues for them in case of dispute. Just be aware of this so if something does go wrong you know where you’re headed.

2. Notice – there will almost always (I say almost because sometimes are they inadvertently left out) be a Notice term. This sets out where and to whom notice is given in case of changes or disputes. The key here  is to make sure your information is correct so that they can reach you at any point in time.

3. Assignment – usually a clause is included that prohibits the assignment of the agreement. Often it will say that the brand may assign it without notice or approval but that you may not assign it without their approval. This makes sense from a business perspective as the brand enters into thousands of agreements and does not want to obtain permission prior to assigning an agreement for business purposes such as merger or change of structure. However, because the brand is contracting with you or your business specifically they don’t want you changing places with someone else.

The terms and conditions you will want to focus on are those that directly impact your relationship, scope of work and compensation. These include:

1. Non Compete – If an agreement includes a non-compete provision, read it over carefully to determine (a) length of time, (b) scope as well as (c) location. A world-wide brand may want to limit your ability to work with a competitor on a global scale. Does this make sense if you’re only focused on the US? Is it appropriate to prohibit your working with a competitor for 12-months when your agreement is only for a 3-month contract?

2. Scope – Define as clearly as possible what work you are to do. Is it a set number of posts? Are there time or word-length requirements? Who provides the images? Will they pay for shipping giveaways? If you need to travel, how is that paid and what is covered? When it says ‘electronic’ does it cover all new aspects of electronic media? Or is the term vague?

3. Compensation – Most people know that the actual amount you’re being paid is negotiable. However, they often overlook the terms of payment. Some companies pay 30-60 days after receiving the invoice. Is that acceptable to you? If your compensation includes both cash and goods, be clear as to the value of those goods and how it will be reported to you for tax purposes.

4. Intellectual Property – this is a big one for bloggers. Who owns it? And what is ‘it’? Read this provision carefully as you will want to know exactly what you may be giving up. In addition, you will often be providing assurance and guarantee that you will not provide anything for which there is a potential dispute over ownership. Thus, if you use images on your posts or site that may be copyrighted for which you do not own or have a license, permission or fair use argument for then there could be a potential for breach. In addition, you will want to know what you are giving up to the brand. Will they be able to use your post on their site without linking to you or without reference to you by name or site? The other concern you should evaluate is whether this is, in fact, a Work for Hire. Work for Hire is a technical legal term related to Copyright and certain terms and conditions must be met.

5. Dispute Resolution – If there is a dispute that escalates beyond the ability to resolve through discussions, you or the brand may need to take a more formal route to resolve the problem. Many companies are now moving to Alternative Dispute Resolution (ADR) programs such as arbitration or mediation rather than using the court system. There are pros and cons to each type of resolution system. Many litigators will tell you that litigation is cheaper and more reliable than ADR. Mediators and arbitrators will say ADR is the way to go.

Some lawyers will say avoid arbitration clauses at all cost. This is fine if you never want to work with the other party again. If you don’t mind standing on scorched earth at the end and having no possible means of maintaining a relationship then litigate away. Some lawyers believe that because the more powerful party can stack the arbitration clause in their favor that there is an inherent lack of fairness or that it could be cost prohibitive to the party that can’t make any changes.

In most situations, this term will NOT be part of any negotiations. The more significant the agreement and relationship the more likely you can negotiate this term. The reason I bring it up here is that if you can negotiate it then you’re likely working with a lawyer who can advise you what is in YOUR best interest. If you are NOT able to negotiate this term, at least know what it means to you should the relationship go bad.

6. Parties – Who are the people/businesses who will be liable on this agreement? I include this although it seems like a no-brainer. If you have been working with another business they likely know you as a person but not you as the business. They many not realize you have formed a legal business entity. When entering into an agreement, be sure the agreement is between the other party and your business, if you have one. Indicate on the agreement the name of the business, the address and the state where it was formed. Indicate the type of business as well. It may not mean much at first, but it can be used as proof to the IRS, as well as in case of dispute that you are not sued personally. If they want both you personally AND the business on the agreement, understand what that means for you legally.

While most every term of a contract or agreement is negotiable, it’s not often realistic to negotiate with a brand on what may seem to the brand to be routine relationships. If a brand or agency wants to work with you, coming back to them with a marked up agreement that looks like you’ve had a run-in with an axe-murderer will not set the tone for a friendly relationship. Remember, they need to go back to managers, supervisors or a legal team with your changes.

From personal experience, I was more willing to make changes to an agreement when the changes were presented in a clear and concise manner. Telling me why it’s important for you to have the changes helps the other side know what your goal is. Remember, you may actually be trying to negotiate with people who know nothing about you. You need to give them a reason to make the changes. Especially when it’s a large company.

Also, rather than marking up every single term you don’t agree with consider why the term or condition is there. Keep in mind that many of these agreements were drafted months or years ago (or even just downloaded from the internet without actually reading it) and may not be updated with references to new technology. Also, understand that they’re not trying to pull one over on you. Many large businesses tend to focus on standardization within the legal department. They do not devote resources to review ever single agreement, often leaving it to brand personnel to finalize agreements. Your contact may have limited authority to modify and change agreements because they are not lawyers and they, themselves, may not fully understand the agreement either.

All that being said, when asking for changes be clear about what changes you want. Know which ones you will be ok with if they can’t change it. And if it is very important that something be changed, do not be afraid to ask for it. Often explaining why you need the change will allow them to see a different perspective.

Finally, when presenting your changes submit them all at once. Don’t piecemeal your requests. It’s very frustrating to have to keep looking over the same agreement and you’re less likely to have success getting your terms and conditions incorporated.