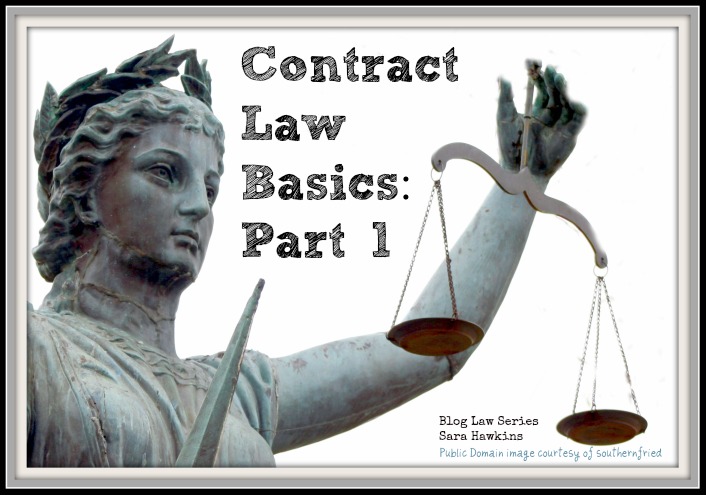 Monetization, ad-sponsored content and conference sponsorship discussions have become more and more prevalent among the blogging community. I’ve noticed that the issue of contractual obligations has started to come up. Throughout the twitter stream I see pleas for sponsorships, giveaway donation, reviews and so forth. In addition, as bloggers, often we agree to a number of obligations that may or may not be written formally or even at all.

Contracts are written or oral obligations between two or more parties. When they are written, they may be as formal as a fully negotiated agreement between lawyers or as casual as the exchange of a few emails. In the law though, there are only three (3) things needed to make a contract enforceable between two or more parties. I use the term parties because I’m including both people and organizations.

For a contract to be valid there must be (1) an offer, (2) acceptance of that offer and (3) consideration, whether monetary or not. It seems pretty simple, but some of the most litigated issues in the court system has to do with one of these three-part of a contract. While they seem very simple, in fact, they can become exceedingly complex by a host of nuances, misunderstanding and timing.

By this point, most people have entered into some sort of contract in their life. As kids or young adults we’ve likely all asked someone to do something, they agreed to do it and we paid them in some fashion. Most of these contracts were oral (verbal).

As you can imagine, verbal agreements are very difficult to enforce. Remember when you were a kid and your brother/sister/friend offered to give you their favorite thing if you would do something for them? And then you did your part but they didn’t do theirs, or you don’t think they did what you thought they were supposed to do. And your mom or dad basically said to figure it out yourselves. It wasn’t because they didn’t want to deal with another disagreement – ok maybe it was – but you understand the difficulty in knowing that whole ideas of he said/she said. If you are a parent, you know this idea of being household mediator very well. Now imagine if it related to your blog and it involved a brand or PR firm.

Verbal agreements are rife with challenges. Sometimes it’s a matter of a simple misunderstanding but there are too many opportunities that create the potential for one or more of the parties not to do with the other thought had been agreed upon. You may have even had a first hand experience with a verbal agreement not going as you thought it was supposed to go.

Written agreements, in this day of email, text, fax, phone and other technology, are much easier to work with. No longer left to wait for days or the mail service, parties can have protracted discussions in a matter of hours, whereas in the past it could have taken days or weeks. Let’s look at each of the three (3) basic aspects of a valid contract.

Often people make this much more complicated than it really is, and from the legal definition it sounds pretty complicated:

an expression of willingness to contract on a specific set of terms, made by the offeror with the intention that, if the offer is accepted, he or she will be bound by a contract.

What this means in real English is: You will enter into an agreement to do what you state IF the other party accepts your terms.

It’s important to note that the accepting party MUST agree to YOUR terms exactly. If there are any changes then the other party has made a counter-offer to you.

This is where negotiations take place. In essence, negotiations are just a lot of counter-offers exchanged between the parties. At some point we get to where all the parties agree on all the terms, at which time we move to the next part – Acceptance.

In the law, acceptance is

an expression of absolute and unconditional agreement to all the terms set out in the offer.

The acceptance must be identical to the offer. The acceptance may be verbal or in writing. Now, the acceptance can be something as simple as a text or email response that says ‘Agreed, send over the final doc.’

Note that a counter-offer, as mentioned above, is NOT an acceptance. Once you propose different terms you invalidate the original offer and can’t then go back and accept those terms.

something of value each party to the contract receives.

Consideration does not have to be money. It could be products or services as well. Consideration can not be something you provided in the past. In addition, consideration must be sufficient, but not necessarily adequate. That means if you want to agree to receive something that will not fully cover your costs or the value provided

(1) No negotiations – Jane’s PR agency wants to sponsor Ellie for a conference. Jane emails over an agreement with all the terms and conditions, including that Ellie will be paid her $250 in compensation within a week of signing the agreement. Ellie reads it over and sends Jane an email saying ‘Looks great, I’ll print it off, sign and scan to get back to you tomorrow.’

There was an offer – Jane sent a sponsorship agreement to Ellie.
There was an acceptance – Ellie sent an email saying she agrees.
There is consideration – Ellie will get $250.

(2) Negotiations – Jane’s PR agency wants to sponsor Ellie for a conference. Jane emails over an agreement with all the terms and conditions, including how much Ellie will get and when. Ellie reads it over BUT she does not agree with the amount of money the agency wants to pay.

Ellie sends Jane an email and explains that she will agree to do what is being asked by the agency but she wants $350 instead of $250.

Jane emails back saying that this agreeable and she will modify the agreement and get Ellie a new one by the end of the day.

There was an offer – Jane sent a sponsorship agreement to Ellie.
There was a counter-offer – Ellie sent back a response changing one of the terms, namely the $250 to $350.
There was acceptance – Jane agreed to Ellie’s new offer and accepted the new terms.
There was consideration – In this example, it is $350.

As you can see with these two examples, in the second one by changing one term – the payment amount – the original offer no longer exists and a new offer (a counter-offer) was put out there and needed to be accepted.

You didn’t say that the parties have to sign the contract, what’s with that?

Under the law of contracts, it is not a requirement that the parties sign the agreement. As we know though, in real life, an unsigned contract may not mean much. Or in the alternative, even with an unsigned contract, people start to work on what they need to do.

Take our example above. If either Ellie or Jane (or both) did not get around to signing it and sending the other a signed copy but Ellie went to the conference and did what was asked of her under the agreement, Ellie would likely have a claim to the compensation agreed upon even without a signed agreement. The law is not designed to punish people who rely on the existence of a valid agreement when the only thing missing are signatures.

What did the parties intend?

Finally, and while not a specific element to a contract, there is an underlying notion that the parties intended to create a legal relation. It’s this concept that makes it really difficult to sue your brother or sister when they say they’ll take you out to dinner and it’s their treat but then only pay their half.

As you can see, there are only 3 things needed for a valid contract – offer, acceptance and consideration. And while seemingly simple, each of these can become nuanced and complex. Nonetheless, with focus and understanding you can now begin the process or creating that formal legal relationship with an eye on protecting yourself.

Keep in mind, though, that contract law can be very complicated. In law school, Contracts is a one semester class. And that class only touches on the basics.

You can read Part 2 of Contract Law Basics about other common terms and conditions you might find when negotiating a contract with a brand or PR agency.